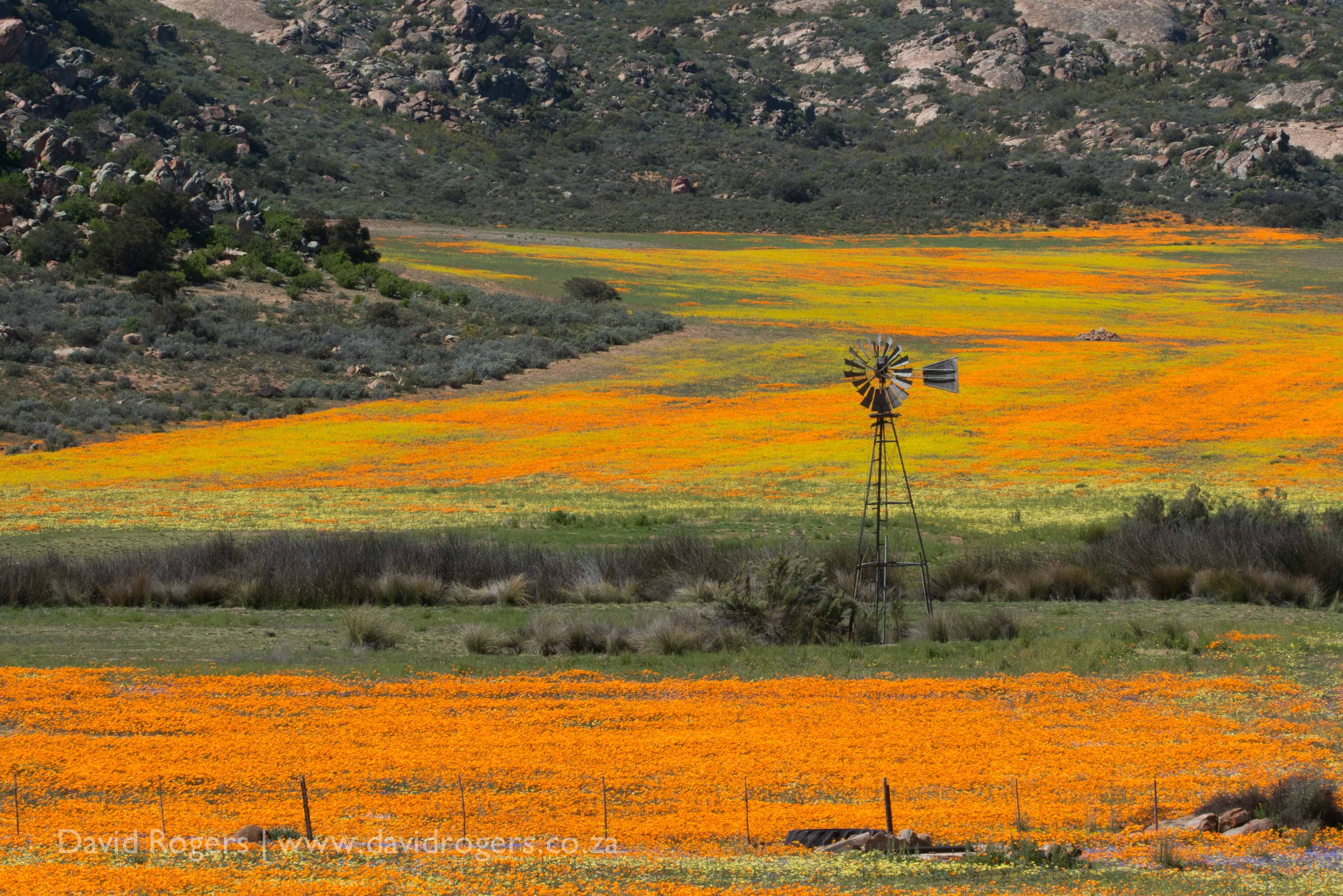 The cold fronts came in strong waves this year – and throughout the winter I have been dreaming of a road trip up the West Coast of South Africa into Namaqualand. Every spring this dryland, which is called the Succulent Karoo is covered with vygies, daisies and other flowering desert plants. It’s a botanical treasure with 7000 species of plants many of which occur nowhere else – and an event that is not to be missed. 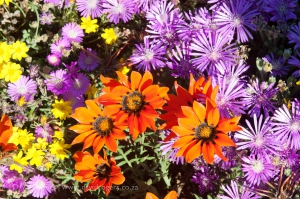 This natural flower explosion is driven by rainfall patterns and their location can’t always be predicted nor guaranteed. The flowers, which depend upon good rains, may arrive early (July) or late (September) and typically move in a colourful wave from north to south and from west to easy — and as one area fades away another reaches its full glory. So it’s a moving target.

Getting great flowers is all about good information so I badgered the flower lines (072) 938-8186 for days before my departure and chatted to locals on the ground to find out where the good flowers were. And then, when the weather looked fine and warm for a stretch, I hit the road.

Soon Cape Town’s traffic was a memory and the looming mountains of the Cedarberg beckoned me on. I drove past Niewoudtville, over the rugged plains of the Knersvlakte and finally into Namaqualand where I knew the flower carpets would be best.

It felt hair-back young being on the road: just my camera, my thoughts and me. It was a reminder of the road-tripping days as a journalist for Getaway magazine when I was young and single. I am in love with South Africa’s interior – the quiet dorps, the curious little guesthouses and the quirky smiling people who are friendly enough – or possibly bored enough – to give city stressed visitors the time of day.

There is much more to these places and people than meet the eye – some of Africa’s greatest intellectuals including the likes of Chris Barnard and Olive Schreiner grew up under the hot tin roofs and beneath the towering church steeples of small town South Africa. It’s hot and flat – a blank canvas for creativity.

I was lucky to find a bed at the Garies Hotel. It had plastic flowers, big five fabric paintings on the walls and gnomes at the front desk – but it had a lot of charm in an old fashioned, overdone sort of way. The lamb I ate, which had been fattened on the aromatic bossies here, was delicious. The hotel had a Liquor Off Sales and from first light photogenic folk in bonnets walked down the streets. 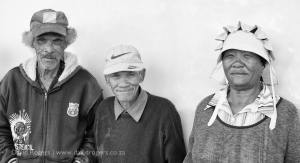 The Nama are the largest grouping of the Khoikhoi people and have lived a hard nomadic lifestyle for thousands of years. They are somewhat diminutive with a delightful language of clicking sounds and faces that are pinched and lined from hours spent in the sun. They are mostly very poor – and the queues for pensions at the supermarket went right out the door. And, sad to say, I am sure that the Lotto machine and the off sales consumed much of this new wealth. That a little town with a few hundred souls has three bottle stores is testimony to the sad economic state of this region.

A few doors down from my hotel was Sophia Guesthouse, a twinkling star in this quiet town. Elizna de Bruyn named the Art Deco main street hotel after her mother and has filled it with carefully considered curiosities including little prams, neatly crocheted doillies, hearts twisted out of wire, mirrors, kitchen utensils and other bits and bobs often with a humorous and ironic meaning. 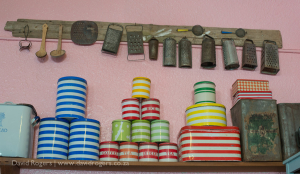 We celebrated over the celebration of kitch with a spectacular cup of coffee – not the rather weak moerkoffie that is served in most establishments round here and is as much a part of Afrikaans culture as roostebrood and jam, but the strong stuff that I depend upon for my morning opkikker.

“Dankie Tannie, I said in a formal Afrikaans way to my hostess (even though she was about my own age) and hit the street.At the busy local information office, a very efficient lady drew me a line on the map and helped me plan my route according to recent sightings. For the next two days, I dutifully followed her recommendations and those gleaned from other travellers along dusty roads that led for miles upon miles of gravel and past little farmsteads where sheep were milling around the fields. 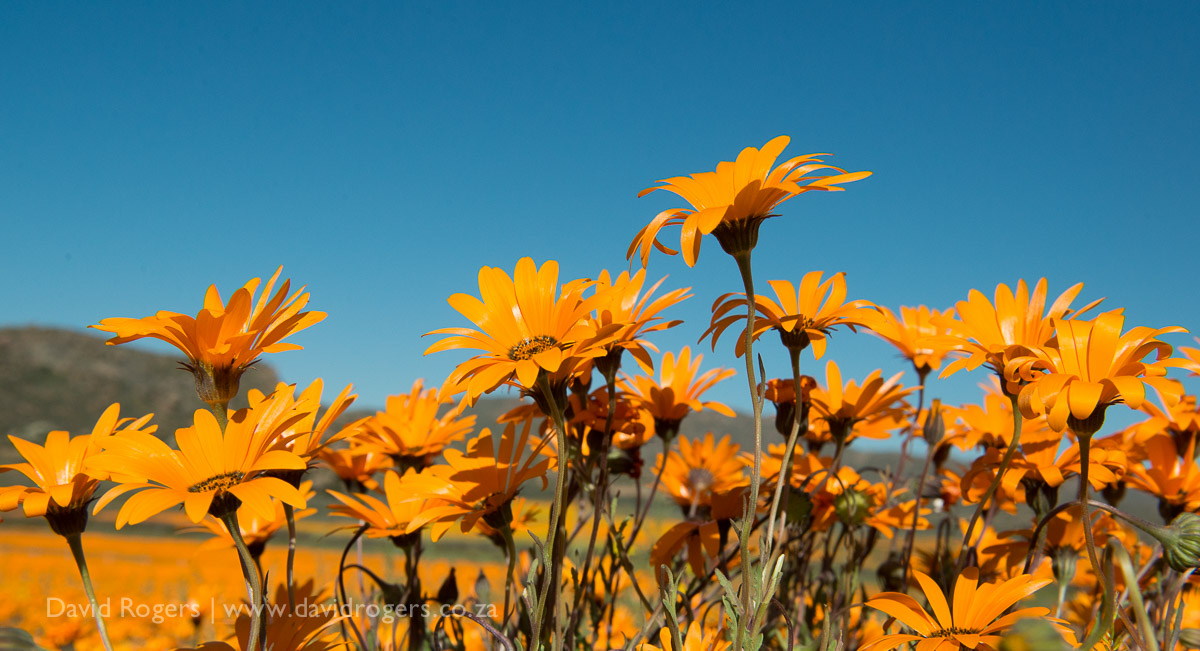 Like any good experience, the migration included, flower watching requires fortitude. The road was bumpy, the weather was hot and there was often miles and miles of nothing to be seen. But, invariably, and just as I was becoming tired, there they were – miles and miles of beautiful flowers in so many colours and forms that they had me banging away on the wheel in delight. 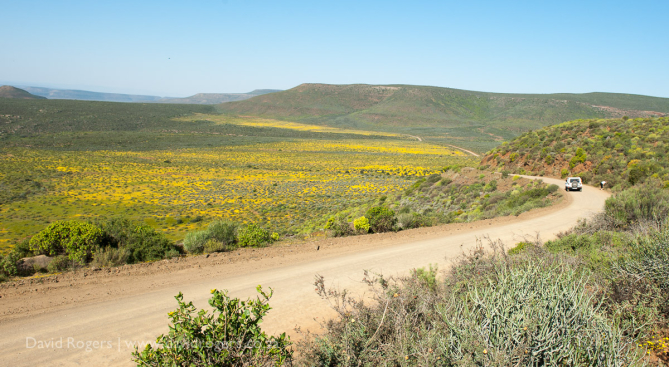 Namaqua National Park was as heart-stoppingly beautiful as any nation icon, Victoria Falls included, and, so I reckoned, were the waves of orange flowers that bejeweled the granite boulders of the Kamies mountains. And then, I took a narrow track down to the sea bumping my way through farmland until the blue of the ocean exploded into view. Extraordinary.

The best flower viewing was during the hot part of the day from 11 to 3. At this time they threw open their petals as one and invited the myriad busy pollinators to do their business. They are a fickle lot; and if it gets windy or cold, these flamboyant exhibitionists simply close up shop.

Flowers, like wildebeest, do not photograph easily. Even when there are lots to be seen you need to find shapes amidst the masses. Either lie down and photograph them against the sky, or find patterns, or rocks or leading lines to break the sameness. In other words you need to photograph the flowers — and the negative spaces where the flowers are not! You won’t see any crocodiles with wildebeest in their jaws out on the fields here but there were critters aplenty including the specially adaptors pollinators, ostriches, agama lizards and larks. 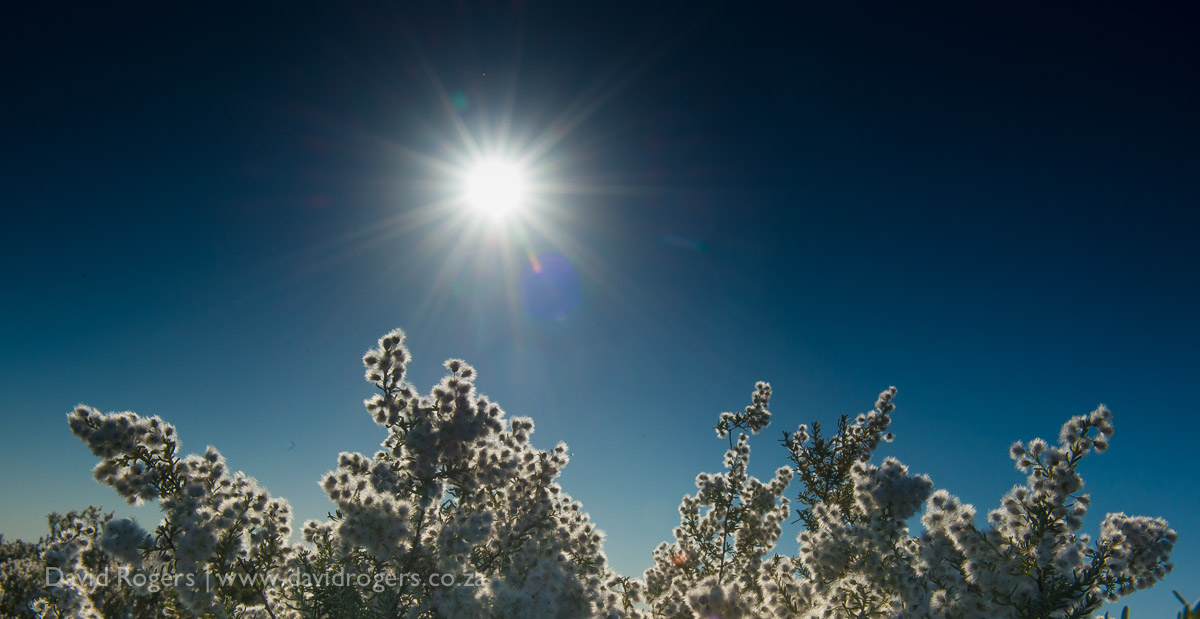 I was not alone on the safari. As you can expect during my midweek trips there were plenty of people driving mobile homes, small campers and on organized bus trips – and most had an itinerary which covered the following places.

But as with most really fantastic wildlife experiences the best places on my safari were not on tourist maps. They were just quiet little spots where I found a bunch of flowers, or a field, all in riotous colour, which begged to be photographed. I spent two days in Namaquand, lay on the ground a lot, and shot 1 000 images or more. Not too bad for a 3 day flower safari. 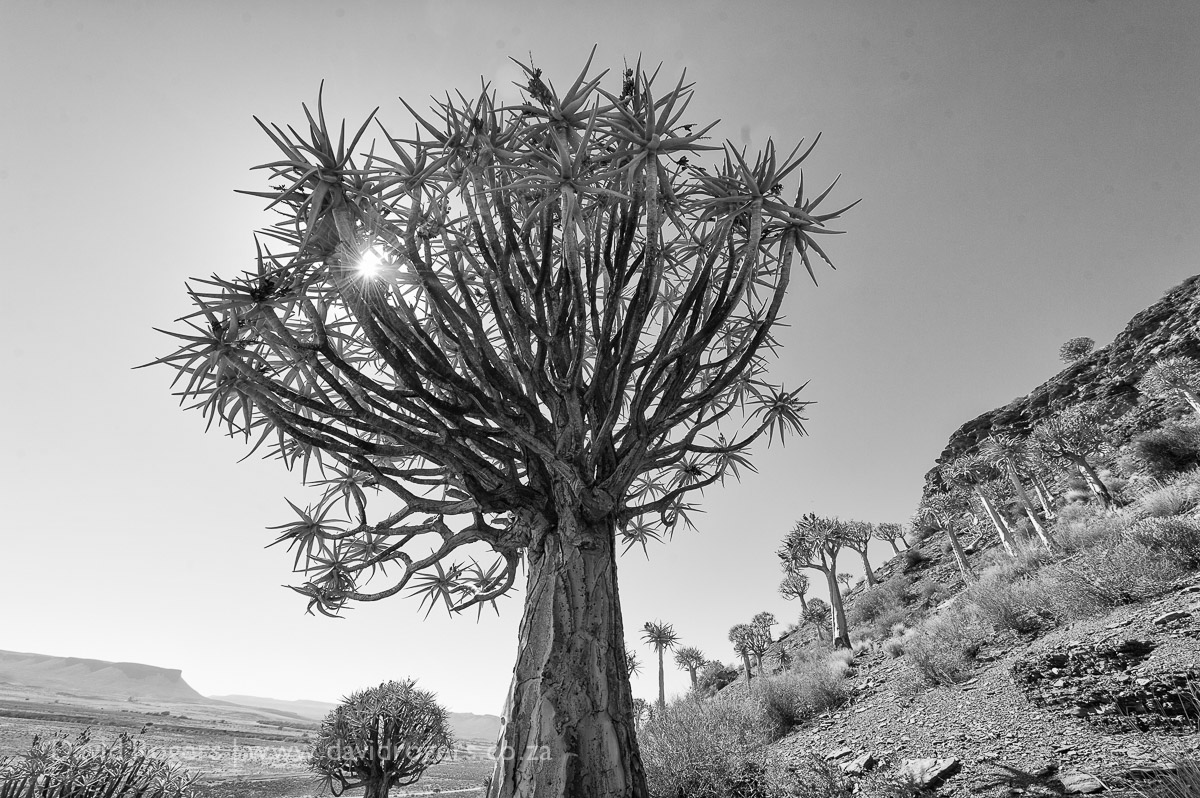 I took the long way home through Niewoudtville, which is the bulb capital of the world, passing extraordinary Kokerboom forests and made myself promises to return. Next year come spring, I will be itching to go again – and like this year I will do it on the spur of the moment, and, if I don’t find that my little single room in the Garies Hotel, I’ll take a tent.

About the Author: David Rogers

David Rogers (the founder of Photos and Africa) has been documenting African landscapes and wildlife for the last 30 years as a writer and photographer for numerous travel and environmental magazines and as a photographic guide and teacher. He was born in Cape Town, and still lives there with his wife, Jenni, and two sons Liam and Dane. He has more than 15 books and 100s of magazine stories to his credit.